The Tarot system, which came to us from antiquity, belongs to the world of esotericism and has an interesting hystory. This is an example of wisdom and deep knowledge that was presented to people in the form of a deck of Tarot cards, where each card (Arcana), possessing its own energy, carries a certain concept, with the help of images and symbols, it reflects any aspect or area of being.

Let’s talk a little about deck structure. The classic Tarot deck is represented by 78 cards, which are called Arcana. The word “Arcana” has a Latin origin, and is translated as “secret”. Tarot decks are divided into three parts: Major Arcana, and Minor Arcana (Court Cards and Number Cards).

Arcana are divided into groups and types, having relationships with each other, representing semantic chains and various combinations. The structure of the Tarot system is multifaceted, logical, multifunctional, and built in such a way that it makes it possible to talk about complex things simply and vice versa deeply and comprehensively study any separate element, topic, question.

Major Arcana – these are 22 cards, with an assigned serial number and a characteristic name that briefly conveys the semantic essence of the arcana. Modern tarot decks are numbered, and the countdown starts from zero (the first element belongs to the Major Arcana and has a serial number 0 – The Fool). Previously, Tarot holders accurately determined both the sequence and the meaning of the cards solely by the artistic images on them. The numbering appeared for convenience not so long ago, when it became available to everyone to purchase a deck and start using it. Major Arcana have a large number of interrelated meanings.

Major Arcana as three series of 7 cards, marked with numbers from 1 to 21. The first seven cards refer to the intellectual sphere of human life, cards from 8 to 14 refer to the moral sphere, cards from 15 to 21 mean various events of material life. The zero card – “Fool” – is placed between 20 and 21, in its value, it is equal to all 56 cards of the Minor Arcana, this is the soul of a person. The Major Arcana contains the archetypes of the Universe. From card to card, you can compose a whole history of the formation of the soul. The Major Arcana reflects the basic images and concepts inherent in every person everywhere and at all times and everywhere (archetypes). These are, for example, the Moon, the Sun, Death…

Minor Arcana (56 cards) are divided into 4 groups, called suits (elements) – wands, swords, cups, pentacles. The minor arcana tell about a person and a person in his daily everyday life. Interacting in the process of alignment with the Major Arcana, we can say that the Minor Arcana help to decipher and detail their messages, translating into a more understandable language.

There are Court Cards​ in every suit. This is the king, queen, knight and page or prince.

Each of the four suits of the Minor Arcana of the Tarot corresponds to one of the elements present and interacting in the world. Thus, the Wands correlate with fire, Cups – with water, Pentacles- with earth, and Swords – with air. The suits can also be identified with the four estates of medieval society: Wands correspond to peasants, Swords to knights, Pentacles to merchants, and Cups to the clergy.

Sometimes an author can add a blank card without images as a replacement for a lost one or specific layouts. 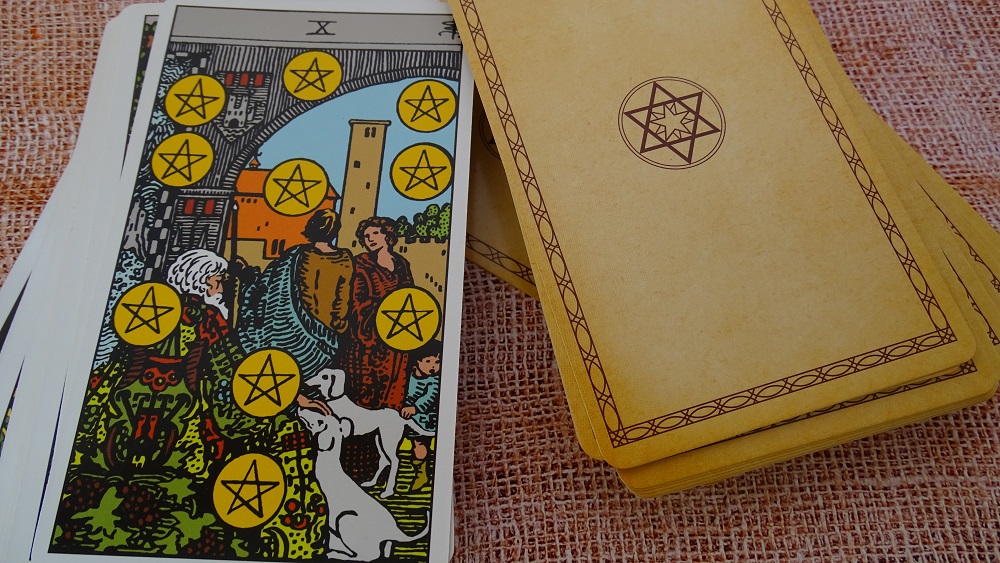